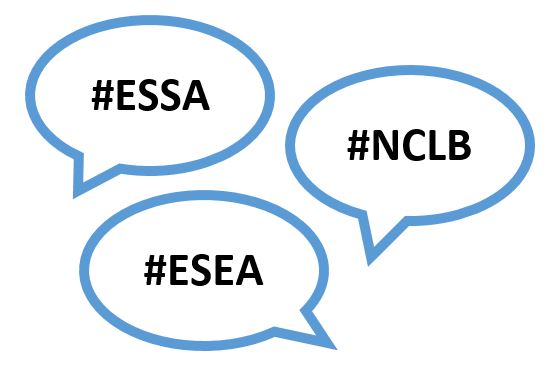 How to use this page:
This page explores the Twitter discourse on the Every Student Succeeds Act during the first week after its passage.  We find that the early discourse on ESSA has generally been positive though there are groups of individuals who view the law negatively.  Advocacy organizations and individuals identifying as advocates have been very active in the conversation.  Finally, we find issues such as equity, teacher preparation, and local implementation have been among the most common issues discussed.  Such early discourse may set the stage and direction of future discussions as the law progresses through implementation.

Working from left to right using the tabs at the top of the page, you can explore the social network discussing ESSA, progressing from characteristics of the network and users to their sentiments towards and discourse around ESSA.

Our work here is inspired in part by previous work on the Common Core Twitter network by Jonathan Supovitz, Alan J. Daly, and Miguel del Fresno.  If you have not already, you can check out their work at www.hashtagcommoncore.com

Background:
On December 10th, 2015, President Obama signed into law the Every Student Succeeds Act (ESSA) marking the latest iteration of the Elementary and Secondary Education Act (ESEA) and the replacement of No Child Left Behind (NCLB).  A hallmark of the ESSA is a shift in autonomy away from the federal level and to the state and local district level.  Under the new law, states and districts will have significantly more leeway with regard to testing, teacher evaluation, academic standards, and a host of other contemporary education policy issues.

With this increased autonomy comes newfound challenges in interpreting and implementing the law at the local level.  The directions taken by state and local actors may depend in part on the mutual understanding that they and the broader population come to regarding ESSA.  Does the law become entangled in political debates around Common Core?  Does the law break with the past ire directed towards NCLB or become viewed as a continuation of such policies?  In part, the answers to these questions will be determined by the way in which ESSA comes to be understood in the immediacy of its passage, and one domain in which such discussions will take place is Twitter.

NEXT: Explore the Network of Users Discussing ESSA