What Sentiments Did Twitter Users Express Towards ESSA?
In the first week after passage, the Twitter discourse around ESSA tended towards generally positive and neutral sentiments.  We utilized a sentiment analysis method in which all of the tweets were categorized through computer analysis of sentiment.  The figure below shows the percentage of tweets that were categorized as positive, negative, or neutral. 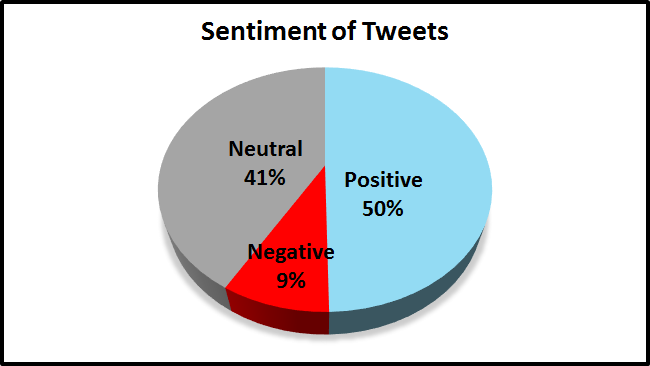 The generally positive and neutral framing of most tweets might have been expected in the immediate wake of the passage of a law that carried bi-partisan support.  For instance, many of the neutral comments may reflect informational posts in which users make note of the passage of the bill without expressing a view in favor or against ESSA.  Those tweeting positive messages may reflect the generally positive political environment towards the new law that allowed for its passage.  That said, the small percentage of tweets with negative sentiment indicate a group of potentially dissatisfied users, those that might be most likely to drive controversy into the law as it progresses in implementation.

What were the Sentiments of the Top Tweeters?
The network of top tweeters demonstrates that many of the most active tweeters were connecting with each other, either by retweeting another top tweeter’s tweet or tweeting directly at a top tweeting user.  As shown below, the top tweeters were predominantly positive or negative towards the law, with few neutral users appearing in the group.  As can be seen on the right hand side of the network, the negative users tended to share more connections with other users with negative sentiments towards the law.  Nevertheless, a number of connections exist between top tweeters with positive sentiments and top tweeters with negative sentiments, indicating that information is still flowing between these two groups.  The numbers associated with each user represent an arbitrary user number while the text abbreviations represent characteristics of the user (Acad = Academic; Admin = Administrator; Adv = Advocacy; EdBiz = Education Business; Elected = Elected Official;  Gov = Government; Ind = Other Individual; News = News Organization; NP = Non-profit;  Org = Other Organization; Reporter = Reporter; Parent = Parent; ProfOrg = Professional Organization; Teach = Teacher; TT = Think Tank; 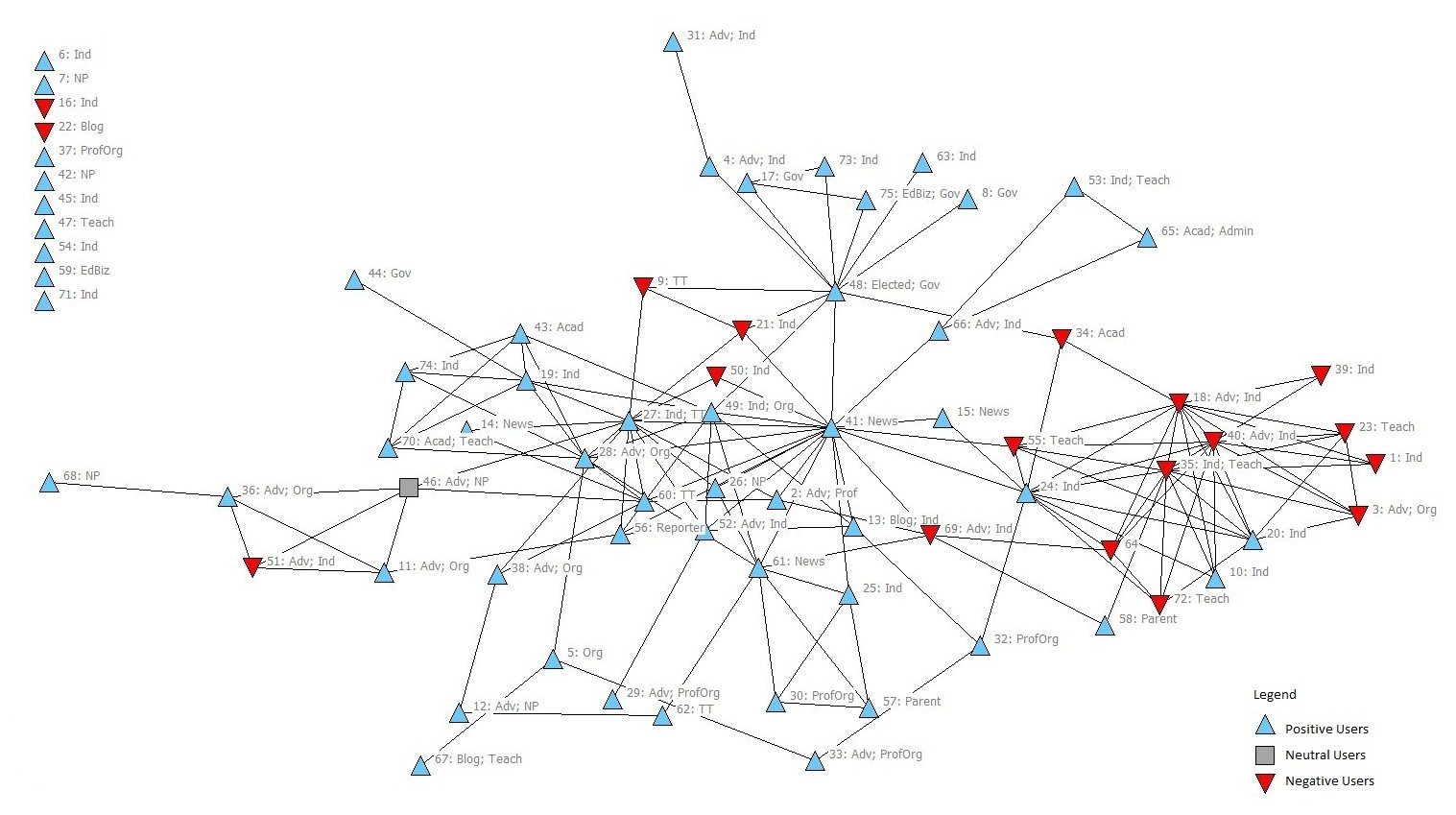 What were the Sentiments of the Most Retweeted Users?
Unlike the top tweeters, the network for the most retweeted users is highly fragmented, with twenty of the thirty-seven users failing to have a single connection with another user in this network.  The remaining users are distributed into two distinct components:  positive users and negative users.  The positive users cluster around a single central user who will be the key individual in disseminating information within the cluster.  The negative users share several common connections, interestingly enough, the negative cluster contains two positive users.  This unique characteristic allows this predominantly negative component to be influenced by alternative ideas regarding ESSA. 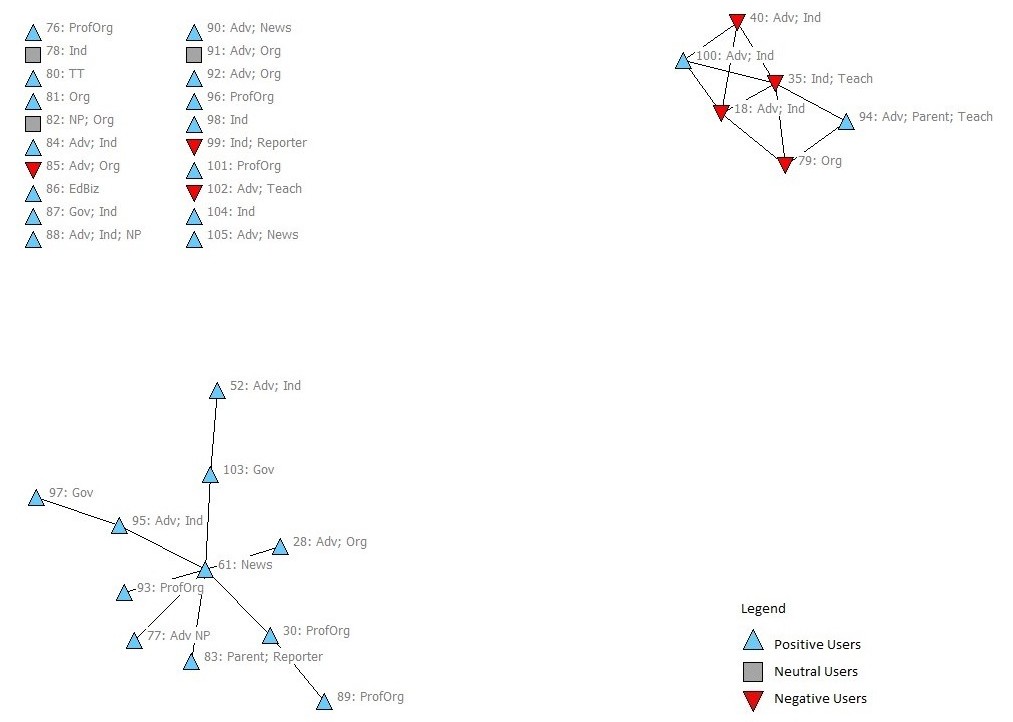 What were the Sentiments of the Most Central Users?
When considering how information flows through a network, it is important to identify the users that have the greatest number of connections within the network.  These well-connected or central users play an important role is controlling the tone and tenor around policy discourse as they are in a position to influence the greatest number of other users. The five most central users in the ESSA network all express positive sentiments about ESSA, which means that their favorable views of ESSA will disseminate to the greatest number of network members.   In fact 44 of the 58 most central users (75.8%) are positive, while 8 express negative sentiments and 6 are neutral.  Not only is the network dominated by positive sentiment users, the fifth most well connected positive user holds twice as many connections as the most connected negative sentiment user and five-times as many connections as the most connected neutral user. 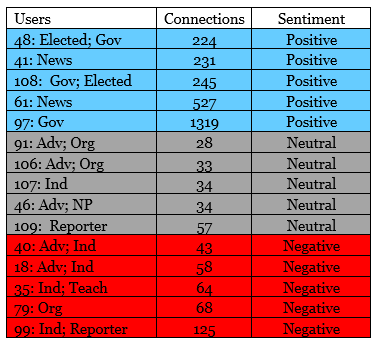 The network visualization below depicts the connections for the five best connected users in each sentiment category.  As with the overall network, cluster patterns emerge so that positive, negative, and neutral messaging actors are most closely connected to others that share the same sentiment. 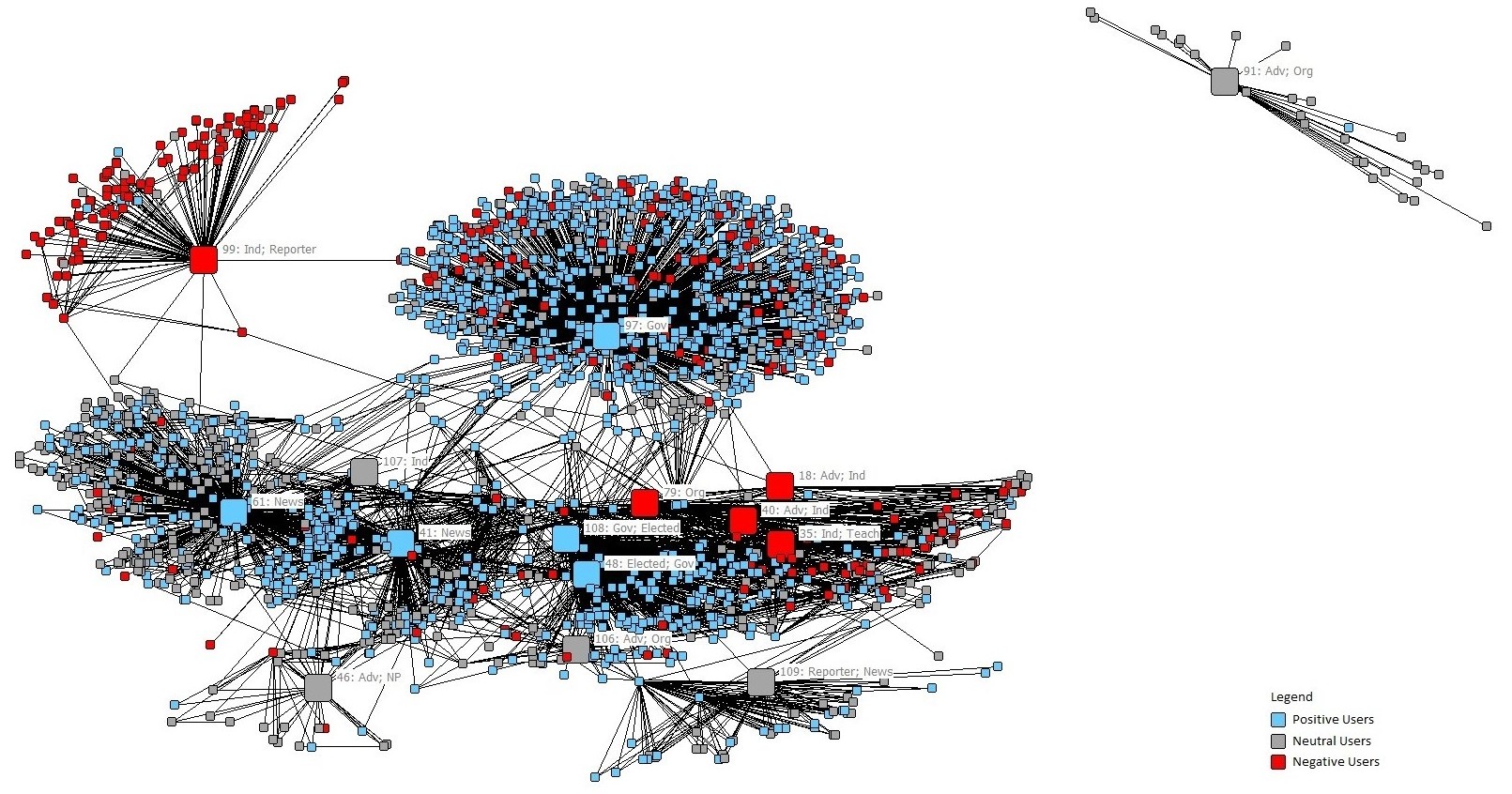 With regard to the flow of information through the network of Twitter users discussing ESSA, the visualizations created for the ESSA network provide a graphical snapshot of the relations between those discussing ESSA after its passage.  This can be beneficial in considering how information flows through a network; however, our visualization treats all connections as equal.  It is possible that some connections, even those most central to the network, carried less weight in the discourse than others.  For example, the single most central user was connected to 1319 other users.   While centrality is typically an indicator of influence, in this instance, this user was the White House.  The messaging and related sentiment initiated from the White House, may hold less sway over network members as the government may be expected to propagate positive views of a recently signed piece of legislation.  It is possible that less central members carried more weight in the network as they may be perceived to be more impartial towards the act.

NEXT: Explore the Discourse (What the Users Said)